Workshop on Blockchain and Transactive Energy in Boulder, CO, USA 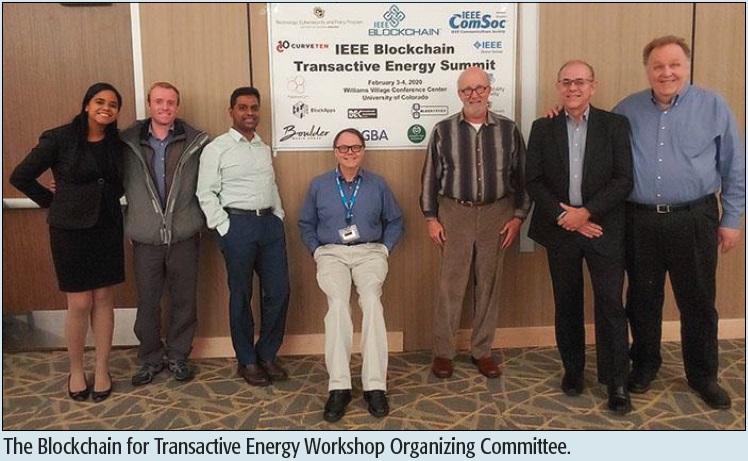 On February 3-4, 2020 the Denver IEEE Section and local ComSoc chapter partnered with IEEE’s Blockchain Initiative to host a program on the use of blockchain distributed ledger technologies (DLT) in the transactive energy sector. The workshop was hosted by the University of Colorado at the Williams Conference Center in Boulder. The workshop was a coordinated effort by the Denver section, in partnership with our IEEE ComSoc chapter, several local companies, and three universities. Despite a heavy snowstorm we still presented a full program over the two days, with about 60 attendees on the first day, and over 30 the second.

Transactive energy (TE) will be an important technology enabler that will change today’s utility business models toward the utility of the future. TE will also affect future energy markets, driven by new technologies, such as energy automation, distributed solar photovoltaic, distributed energy storage systems (DESS), smart metering, distributed energy resources (DER), and so one. However, current TE models lack the “trusted transactive layer” needed to implement new energy market dynamics capabilities. In this context, the presentations covered the full gamut of issues pertaining to transactive energy and distributed ledger technologies. The IEEE was also able to present their standards work and research in Colorado in the above areas.

After a full day and a half of presentations, breakout sessions began. The attendees selected important topics that emerged during the presentations. Then they broke into individual groups to discuss areas and generated ideas of what the community should do in that area. Furthermore, a number of important topics were discussed during breaks, in ad hoc fashion. They included topics such as what the next steps for this group in the Denver-Boulder area will be. While there was a wealth of topics discussed, most of the discussions were focused on important areas, and well-treated topics were only cursorily examined.

For example, one breakout session discussed the cybersecurity aspects of blockchain in transactive energy applications. This group discussed several issues in this space and concluded with an action item to review a set of papers that came out of a task force that addressed this topic. This was typical of the activities during this workshop and led to many new ideas within this space.

In the end, this workshop advanced even more actions, beyond what the groups identified. Going forward, the IEEE blockchain initiative is developing several projects in the transactive energy sector, including standards work, reference architectures, and possibly conformity assessment.

One effort we believe will be needed is a reference deployment of the evolved architecture. The first of these may be in Colorado as a result of this workshop. We also identified several contributors to the education content we are cultivating as well. Also, several attendees expressed concerns around privacy in this space, and privacy will be a focus area for the initiative going forward, so we now have more experts interested in working with us. Watch blockchain.ieee.org for presentations and video content from the event.