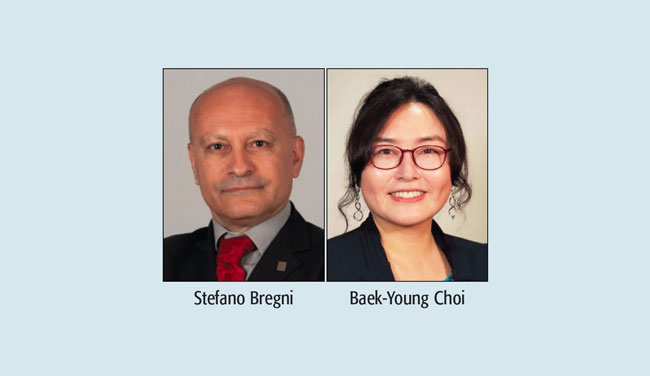 This article continues the series of nine interviews to the Officers of the IEEE ComSoc Member and Global Activities (MGA) Council, which is published every month on the Global Communications Newsletter.

In this series of articles, I introduce the Vice-President and the six Directors on the MGA Council (namely: Member Services, Industry Outreach, and AP, NA, LA, EMEA Regions), as well as the two Chairs of the Women in Communications Engineering (WICE) and Young Professionals (YP) Standing Committees. In each interview, one by one they present their sector activities and plans.

In this issue, I interview Baek-Young Choi, Chair of the IEEE ComSoc Standing Committee on Women in Communications Engineering (WICE).

Baek-Young Choi is a Professor of Computer Science in the School of Science and Engineering at the University of Missouri, Kansas City, USA. She received her Ph.D. in Computer Science and Engineering from the University of Minnesota, Twin Cities. Her research interests generally lie in the broad area of networking and communications, with specific emphasis on Internet-of-Things, smart city technologies, and mobile security. She published three books on network monitoring, storage systems, and cloud computing, and published more than 100 papers and 2 awarded US patents. She has been a faculty fellow of the National Aeronautics and Space Administration (NASA), U.S. Air Force Research Laboratory’s Visiting Faculty Research Program (AFRL-VFRP) and Korea Telecom’s — Advance Institute of Technology (KT-AIT). She has been an associate editor for IEEE Internet-of-Things Journal, IEEE Consumer Electronics Magazine, Springer Journal of Telecommunication Systems, and Elsevier Journal Computer Networks. She has chaired the IEEE International Smart Cities Conference (ISC2) in 2018, the flagship conference of IEEE Smart Cities Initiative. She has also served for a number of conferences and workshops in various capacities, including as a Keynote Speaker, Workshop or Symposium Chair, Technical Program Chair, Tutorial Speaker, and many other roles as an organizing committee member.

Hello Baek-Young. Let us begin by summarizing the representation of women in various grades of ComSoc Membership?

Would you remind us something about the mission and history of the WICE Committee?

WICE’s mission is to promote the visibility and roles of women communications engineers and to provide a venue for their professional growth. It is a ComSoc Standing Committee aligned under the Member & Global Activities Council (MGA-C), of which Ana Garcia Armada is the current Vice President.

The idea of a WICE group was initiated by Heather Yu in 2008. Then, Sarah Kate Wilson took it to the next level as a ComSoc Ad-Hoc Committee. WICE was later elevated to a Standing Committee of ComSoc beginning with 2014, when Octavia Dobre was the WICE Chair and you, Stefano Bregni, were Vice President for Member Relations (renamed Member and Global Activities two years later).

How did you get engaged with the WICE Committee and activities?

Any woman ComSoc member is automatically a member of WICE. However, note that any ComSoc Members supporting gender Diversity, Equity, and Inclusion is also welcome to join WICE activities! Thus, we may say that I have been a member of WICE all along. However, my most prominent participation in WICE activities was when I co-organized the Joint Workshop of N2Women and WICE at ICC 2018, held in Kansas City, MO, USA.

As for serving on the WICE Committee as Officer, I have been serving as a Member-at-Large and I have been asked to serve as Chair after ICC 2022, when my predecessor, Nury Ramirez Cely, had to step down due to her personal and professional workloads.

Due to COVID19 pandemic, conference activities had been challenging. Earlier this year, Nury managed to build a group of committed volunteers, relaunched in-person and hybrid events, put in place student contests, and supported other committees within ComSoc. Though she only served as the chair briefly, I am grateful to our committed WICE board members that she put together, who are from various regions around the world and continue to work passionately toward our mission.

Would you also tell us something about the current composition of WICE?

Our committee consists of ComSoc members at various stages of their career journey ranging from students to Fellows and industry seniors and CEO. We also strive to ensure gender-diversified panels at all meetings including the WICE committee itself, where we have male committee members too. The current WICE committee roster is the following.

What are most relevant service activities and initiatives offered by WICE to ComSoc Members?

WICE organizes a number of activities and initiatives, including the following.

Focusing on this year in particular, what have been most significant activities carried out by WICE in 2022?

WICE has been very active this year, both online and offline/in-person. We have been promoting women ComSoc members and WICE activities via social media such as Facebook and LinkedIn. We also have a very large number of subscribers to the mailing list.

After the online conferences of the first couple of years of the pandemic, now conferences are held in hybrid mode, and in-person attendance is increasing. Accordingly, more conference activities have been planned. WICE events were, or are to be held at a number of conferences, including WCNC’22, ICC’22, MeditCom’22, TenCon’22, LatinCom’22, and Globecom’22. Especially for Globecom’22, the WICE event had diverse programs of two panels, a mentoring session, and two professional career coaching sessions. While the programs are held both online and in-person, the majority of panelists, moderators and mentors are going to be in-person in Rio de Janeiro, Brazil. It was very well received with nearly 80~100 people attending overall. The open nominations and selections of WICE awards for this year have been recently completed. The award ceremony will also be held at ICC 2023 hoping most awardees would be present in-person.

As a special project for this year, under the leadership of MGA-C, 50 ComSoc women interview videos are being produced. WICE also supported other committees’ activities by ensuring women ComSoc members’ participation in the organization or operation of their activities. For instance, WICE helped with multiple activities and competitions for Pre-University and University students.

Do you have any particular plans for next year?

Next year, in addition to continuing our regular activities stated above, we hope to be able to extend childcare support via conference-hosted childcare, so that it would be more amenable for ComSoc parents of young children - male or female - to attend the conference.

We also plan to implement diverse formats and topics for our events at conferences. I also want to add that the WICE committee is always open to suggestions and ideas for its mission.

A last remark to conclude?

WICE is committed to helping the recruitment, retention, and career growth of women communication engineers toward gender diversity, equity, and inclusion in our society.

I very much appreciate the ComSoc leadership supporting WICE, and thank you, Stefano, Editor-in-Chief of the IEEE Global Communications Newsletter, for your integral and continued support for WICE and this opportunity to increase the visibility of women in ComSoc.