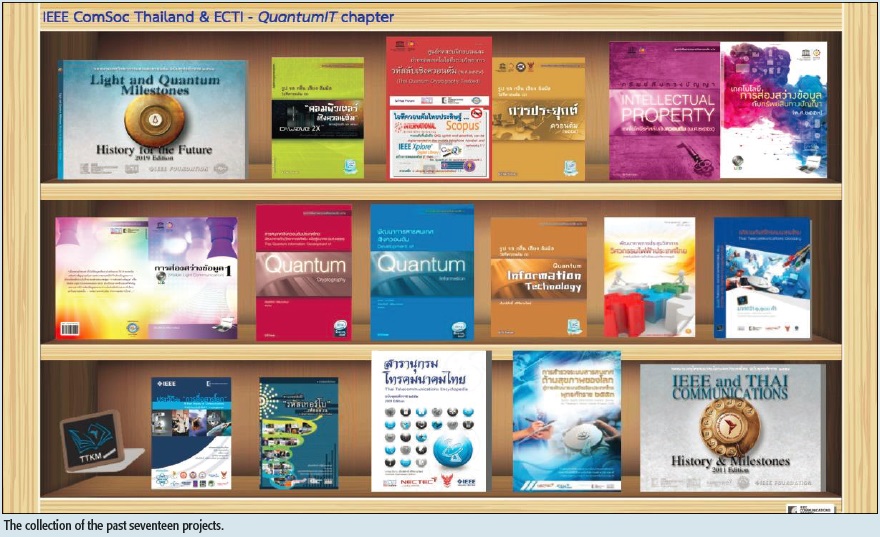 On the occasion of the 10th anniversary of Thai Telecommunication Knowledge Management (TTKM) Forum, related statistics of the past projects are reported with the collection of old time newsletters and photos at www.quantum-thai.org/10th-ttkm-anniversary. Thanks to all sponsors and supporters for those successful public services of the past decade.

Since the first result on “A Brief History of Communications” – A Fifty Year Foundation for the Future (1952-2002) of the IEEE Communications Society was translated into Thai and published in the year 2008, it sparked consequent ideas regarding local historic relevance. The Thai Telecommunications Encyclopedia (2009) with a large content platform was then set up. Following was a project on benchmarking of national technology advancement with coinciding global stories, an elegant pictorial history and milestones granted by the IEEE Foundation, which was published in 2010. The TTKM portal was then formed in the same year to manage and utilize those valuable resources from the national archives, IEEE global history networks, and many others.

To date, 17 titles have already been published covering a wide range of audiences. Generally, four target groups were categorized in order to ensure appropriate results for each background. Those are: technical book; reference (encyclopedia, glossary, and standards); public realization or easy access story for young generation and non-technical background user (contemporary applications, pictorial and milestone, and Q&A); and an executive summary for policy makers (testbed and intellectual property survey, technology foresight and roadmap, and others).

Till this year, more than 18,000 hardcopies including 6,000 CDs and 4,000 posters and postcards in total have been distributed nationwide through the network of the IEEE Thailand section and institute for the promotion of teaching science and technology (IPST). Those free of charge results were also delivered as a handout for school talks and seminars, workshops and conferences, and exhibition and dinner talk. In addition, the entire electronic version has been downloaded approximately 26,000 times, and a hundred videos (yearly news, technology digest programs, and other topics) have over 48,000 views.

Indeed, past TTKM activities were enhanced from many strong collaborations. The national regulator (National Telecommunications Commission (NTC)) was later combined with broadcasting and transformed to be NBTC, supported heavily on building information infrastructure for the first 2008 encyclopedia and a few later role model projects. Moreover, the Thai ComSoc Chapter as coordinator also proudly bridged the local ECTI–Electrical Engineering/Electronics, Computer, Telecommunications and Information Technology association to be a sister society with the IEEE Thailand Section. As a result, a few national and international agreements were signed. Synergy on education and humanity projects for overcoming the digital divide were proposed jointly, resulting in many more seminars, conferences and publications. Impressively, those exemplary forums also influenced a few more sub-technical fields. New forums of Thai quantum information (Q-Thai.org) and visible light communications (LED-SmartCon.org) were subsequently founded. The extended platform later benefited another highlight pictorial project on “light and quantum milestones (2019)” as a part of the celebration of the International Day of Light (IDL) proclaimed by UNESCO. It was another time of honor, and the IEEE foundation fully supported fully that youngest project.

In conclusion, during the year of the COVID-19 pandemic (2020) all the activities over the past 10 years are reunited and celebrated online. Remarkably, one of many interesting feedbacks is conveyed as: “they are not only accomplished to educate for public understanding in the main field, but also to strengthen a new technical branch and raise awareness on related fraud or fake technology and news”. Suggestions are also shown, for instance, the Thai ComSoc chapter should engage with how to play a role for healthy people and society, how to promote more safe and creative media with good media ecosystem, and how to empower women in local engineering community.

Thanks to all messages. They have been addressed as the next challenge toward the new normal society ahead.