From the Republic of Macedonia Chapter: Another Successful FutureComNet Edition

FutureComNet is an annual conference organized by the Institute of Telecommunications at the Faculty of Electrical Engineering and Information Technologies in Skopje. The main idea is to celebrate the World Telecommunications and Information Society Day (WTISD), on 17 May. Moreover, this year (2016) marks two noteworthy milestones: the 100th anniversary of the birth of Claude Shannon, and the 60th anniversary of the birth of Nikola Tesla. Therefore, the IEEE R. Macedonia ComSoc chapter decided to support FutureComNet 2016 in order to celebrate these important milestones and increase the visibility of the chapter and its wider dissemination. Prof. Liljana Gavrilovska is the General Chair of FutureComNet 2016 and the past president of the IEEE R. Macedonia ComSoc chapter; the current president, associstae professor Vladimir Atanasovski, was involved in the organizing committee of FutureComNet 2016. 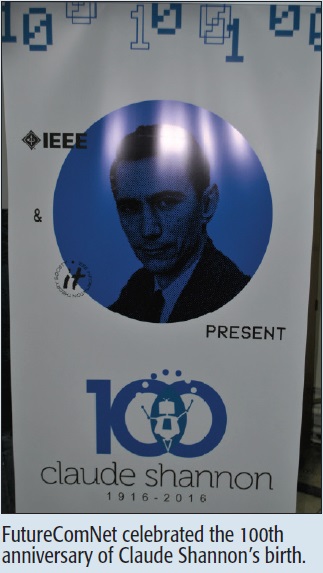 The FutureComNet conference gathers local and regional experts to give plenary talks and organize round table sessions on hot topics such as 5G, SDN, virtualization, Over-The-Top (OTT) services, IoT, etc. Previous editions featured speakers such as professor Ian Akyildiz from Georgia Tech, the CTO of Deutsche Telekom in Macedonia, etc. This year (2016), the conference was organized for the third time under the motto “Internet-of-Things: The Great Disruption,” and was focused on standardization in IoT and IoT practical use-cases. There were plenary talks from Dr. Srdjan Krco (DunavNet company, Serbia), Peter Statev (Bulgaria), a representative from Huawei Macedonia, and several talks from academia and industry in Macedonia on practically realized use-cases of the IoT paradigm. Also, there was a short exhibition showcasing the life and the work of Claude Shannon and Nikola Tesla through videos and posters. More info can be found at http://tk.feit.ukim.edu.mk/ITK_workshop_2016/.