Report of the Opto-Electronics and Communications Conference (OECC) 2015 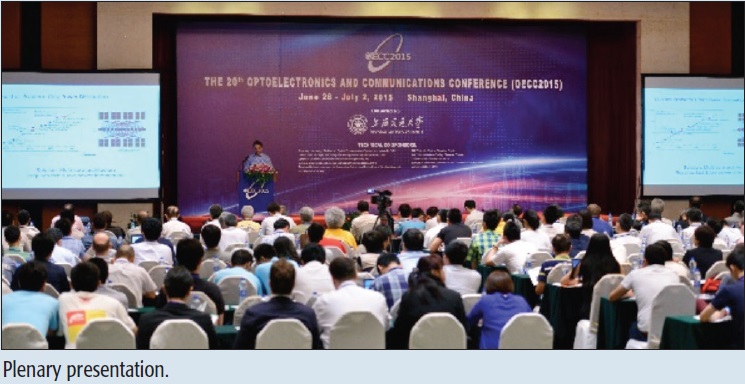 The OptoElectronics and Communications Conference (OECC) is one of the biggest worldwide conferences focused on the latest optical and photonic research areas. OECC 2015 was held in the Shanghai Everbright Convention Center, Shanghai, China, from June 28 to July 2, 2015. The conference provided a platform for researchers from around the world to share their latest research advances, promoting international collaboration.

There were 470 submissions in total, including 327 contributed submissions from 33 countries or regions around the world. A total of 205 papers were accepted, for an acceptance ratio of 62.7 percent. Each paper was reviewed by at least three peer reviewers. There were 152 oral presentations, 124 invited presentations, and 53 poster presentations, arranged into eight categories, two symposia, and two workshops, listed below.

The post deadline paper (PDP) presentations were organized on the evening on June 30. Four post deadline papers were accepted after the revision of technical committee members. They were “Record Field Demonstration of C-band Multi-Terabit 16QAM, 32QAM and 64QAM over 762km of SSMF” by Rahman, Coriant R&D GmbH, Germany, “What is the True Value of Dynamic Optical Path Switching?” by Kurosu, NIAIST, Japan, “First Demonstration of Holistically-Organized Metro-Embedded Cloud Platform with All-Optical Interconnections for Virtual” by Chen, BUPT, China, and “4–28 Gbaud PAM4 Integrated ROSA with High-Sensitivity APD Datacenter Provisioning” by Nakanishi, NTT Corporation, Japan.

The banquet took place on the evening of July 1. During the banquet, best student papers were awarded to three students. A review of the past 20 OECC conferences by sand painting was made successfully. Chinese traditional Sichuan face-changing was also performed.

OECC/PS 2016, to be held in Toki Messe, Japan, was promoted to all participants on July 1, 2015, a fantastic banquet night in Shanghai!