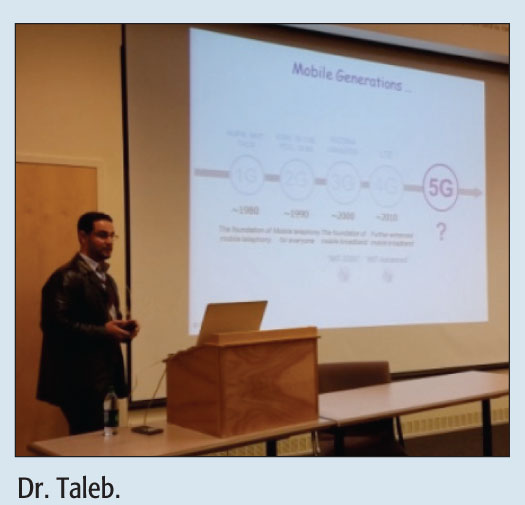 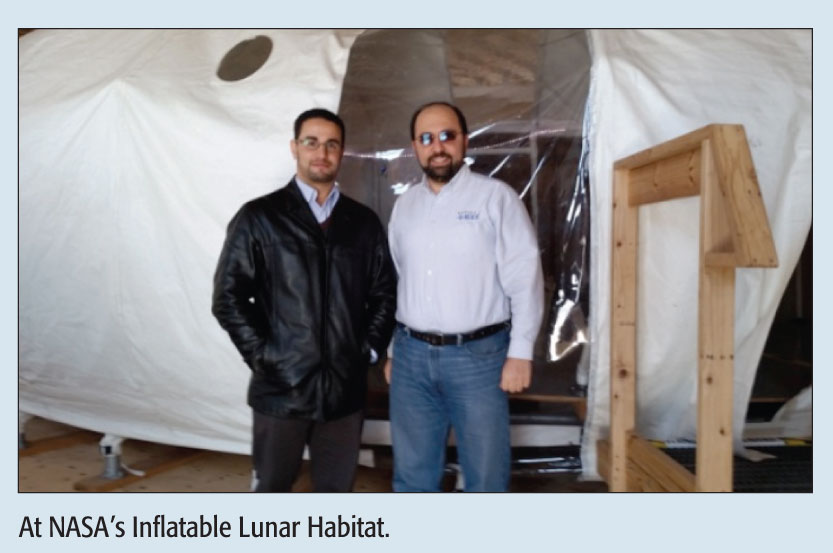 Dr. Tarik Taleb is currently a professor at the School of Engineering, Aalto University, Finland. He has been working as senior researcher and 3GPP Standards Expert at NEC Europe Ltd, Heidelberg, Germany. His talk, titled “Towards 5G: Carrier-Grade Programmable Virtual Mobile Networks,” was delivered on 19 March 2015 at the University of Maine. The talk highlighted the challenges that current and future mobile systems do and will face. He then showcased how programmable virtual mobile networks can be used as an efficient solution to revolutionize the congestion management concept and deal with the ever-growing volume of mobile traffic. His talk was well received by students, faculty, and industry professionals in attendance. Dr. Taleb’s talk was unique in that it provided the audience with a multi-faceted perspective from the academic, industry, and standards points of view. The talk was followed by a tour of NASA’s Inflatable Lunar Habitat (see photo below left), which is at the University of Maine’s Wireless Sensing laboratory, and includes a 124-node wireless network of passive and active sensors.

On 24 April the Maine Chapter hosted Sebastian Ventrone, IBM Senior Technical Staff Member and IBM Life Time Master Inventor, to speak about the Art of Design through the Use of Innovation and the Harvesting of Patents. His talk was directed at students to complement their classroom training with this unique professional development opportunity. The student chapter was also involved in organizing this talk, and because of the high level of interest from students, they are planning to repeat this event in the Fall.

Another interesting event hosted by the Maine chapter in collaboration with the Boston and New Hampshire chapters was a DLT talk on 1 May by Dr. Hamid Jaafarkhani on the topic “Distributed Beamforming in Wireless Relay-Interference Networks”, which was paired with a second talk on “Decoding of Binary Codes in the Presence of Channel Mismatch: Correction of the LLRs”, delivered by Dr. Leszek Szczecinski. Hamid Jafarkhani is a Chancellor’s Professor in the Department of Electrical Engineering & Computer Science at the University of California, Irvine, where he is also the Director of the Center for Pervasive Communications & Computing and the Conexant-Broadcom Endowed Chair. Hamid Jafarkhani is one of the top 10 most-cited researchers in the field of “computer science” in the period 1997–2007. Leszek Szczecinski is an associate professor at INRS-EMT, University of Quebec, Canada, and adjunct professor at in the Electrical and Computer Engineering Department at McGill University. These two talks attracted both a technical and general audience to the event, making the long trips to the talk venue worthwhile. 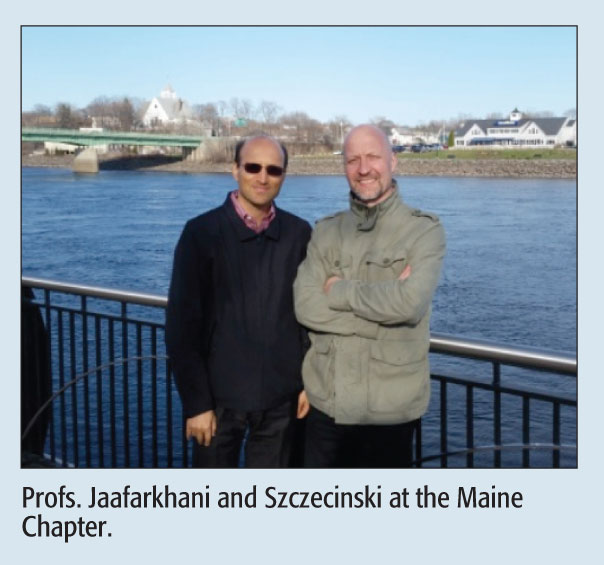 Because of the large geographic dispersion of members in the Maine section, some attendees had to travel three hours each way to attend these talks. The attendance in these events ranged from 30 to 60 attendees, which is comparable to the membership count in this chapter.