Professional and Community Development Activities in New Zealand: A Reflection 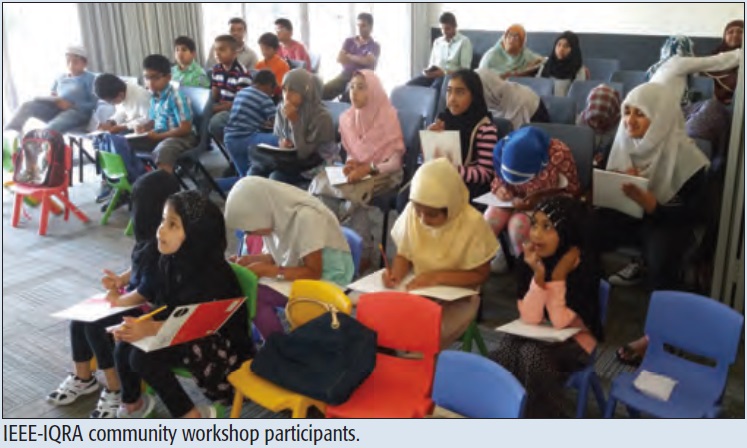 This article highlights and reflects on professional activities, including community development programs, an IEEE Distinguished Lecturer (DL) tour to New Zealand, and wireless workshops conducted during 2017-2018.

This workshop was held on 11 February 2017; a follow up event from the last successful workshop held in December 2015 (reported in the July 2016 issue of the Global Communications Newsletter). We selected the IQRA Academy as the site for this workshop due to its distinct Auckland-based community school run by a group of dedicated volunteers. IQRA aims at providing students (ages 5 to 15) with a good foundation of Islamic knowledge and faith/ethics in supplementing moral/ religious education to the traditional schools in New Zealand (NZ). The idea was to unlock young minds through community workshops in NZ who will be future members of IEEE, especially when they enter into the tertiary institutions.

This workshop began with a short power point presentation highlighting IEEE’s contributions in the development and standardization of emerging technologies for humanity. After introducing IEEE and its potential community benefits, we presented a short video to highlight the significant contributions made by IEEE in the field of Science/Technology. The students enjoyed the video presentation and were excited to learn more about IEEE. A number of interactive quizzes were given to the students to test their knowledge and understanding of various aspects of IEEE. The students did well with the quizzes, indicating that they had learned IEEE activities effectively.

A day-long AUT-IEEE Advanced Wireless Network Workshop was held at the Auckland University of Technology (AUT) on 21 November 2017. This workshop had 13 excellent presenters, including Professor Fumuyuki Adachi (Tohoku University, Japan); Professor Yifan Chen, (University of Waikato); and Professor Winston Seah (Victoria University of Wellington). Approximately 60 engineers, researchers, academia, and students from around the country attended the event, which provided an excellent opportunity for networking and collaboration. We thank Dr. Xuejun Li (AUT) for organizing this great event.

We hosted two IEEE ComSoc Distinguished Lecturers (DL) over the last two years. Professor Song Guo (Hong Kong Polytechnic University) visited NZ as a ComSoc DL and gave four public lectures in Auckland, Wellington, Palmerston North and Christchurch on 25, 26, 27, and 28 July 2017, respectively. Professor Guo’s talk on “Device-to-Device Communication in Cellular Networks” generated a lot of interest among the participants for further discussion and collaboration. The tutorial style presentation helped the audience to understand the technical subjects very well. There was an opportunity for further question/ answer after the presentation.

Dr. R Venkatesha Prasad (TUDelft, The Netherlands) was our DL last year (2018). He offered four public lectures in Christchurch, Wellington, Palmerston North, and Auckland on 29, 30, and 31 October, and 1 November, respectively. Additional details about the DL lectures in Auckland are presented next. The AUT School of Engineering, Computer and Mathematical Sciences hosted the Network and Security Research Group (NSRG) workshop in conjunction with the IEEE DL program on 1 November 2018. Dr. RangaRao Venkatesha Prasad of the Faculty of Engineering, Mathematics and Computer Science at Delft University of Technology in The Netherlands delivered a fantastic keynote talk titled “Internet of Things, Approximate Services and Virtual Sensing” which was well received by the audience. Dr Prasad also offered a special session with research students, which was very productive.

Our Ph.D. students from NSRG also presented their research on that day to an audience from across AUT and further afield before a networking afternoon tea. Organizing chair A/Professor Nurul Sarkar received good feedback from the participants, indicating that the event was successful. Despite the busy time of year, approximately 40 people within and outside of AUT attended the session. This workshop was co-sponsored by AUT and IEEE.

We hosted a day-long IEEE NZ Wireless Workshop at AUT on 7 September 2018. This was a premier annual event that brought together about 100 people, including industry professionals, engineers, researchers, academics, students, policy makers, and those working in start-ups to discuss technologies and issues of interest to the wireless community in NZ. The workshop featured 25 presenters from NZ universities and local industrial partners. It was one of the largest ComSoc events in the country.

We offered best student presentation awards on that day. The winner was Ms. Chelsea Miler, a Ph.D. student from VUW. A pre-workshop hands-on tutorial on ‘software defined radios’ was organized by our industrial partner National Instruments on 6 September. Dr. Saeed Ur Rehman and Assoc. Professor Boon-Chong Seet organized the event under the umbrella of AUT’s wireless innovations in engineering (WISE) research group.

Being a small IEEE joint NZ ComSoc Chapter, we have managed to retain members over the years, which is excellent. In addition to the Distinguished Lecturer (DL) program, invited talks, and workshops, we established a new initiative of unlocking young minds through IEEE community school workshops and played an active role in community development in NZ. Our ongoing community development program was highlighted at the Chapter Chair Congress held in Singapore in December 2017. The DL programs, and wireless workshops were very effective as far as networking, academy-industry link, and sharing ideas are concerned. Last year was a very productive year for us in terms of professional development of the members of the wider community. We are working hard to organize more professional development activities (workshops, DLs, and invited talks) this year. Thanks to IEEE ComSoc, the NZ North, South and Central Sections, and AUT for their financial support throughout.