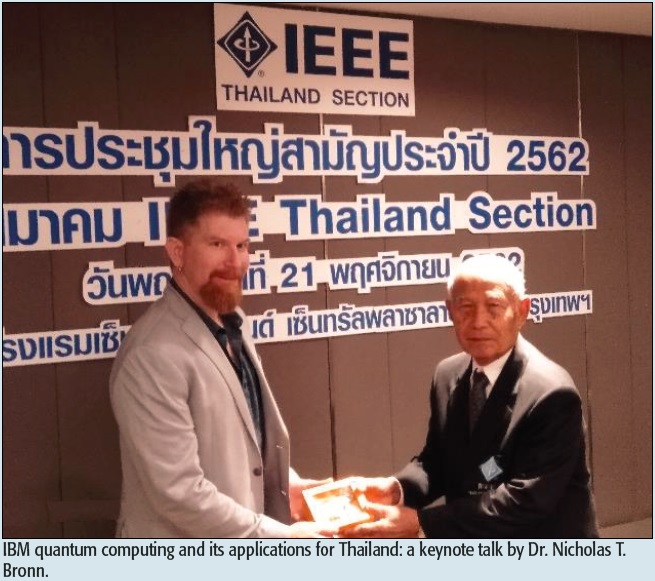 “Light and Quantum” was themed jointly for Thai ComSoc’s activities throughout 2019 as: 1) to celebrate the international day of light (IDL 2019); and 2) to raise awareness of the coming quantum information technology era in Thailand. Multievents and projects were then accordingly organized on site and online. Those included a highlight activity supported by the IEEE foundation, “Light and Quantum Milestones 2019: History for the Future”. The grand opening with an exhibition of this project of the year was done successfully on November 21 at the IEEE Thailand section’s annual meeting combined with another major talk from IBM quantum computer.

Recalling a long decade of voluntary projects for public realization and awareness founded by the Thai ComSoc chapter with its sister society (QuantumIT Chapter - ECTI Association), there have been organized a number of talks and seminars and published dozens of articles, videos, and other social medias emphasizing the previous failures of the national R&D on communication engineering and information technology (IT) such as 3G, UAV, hard disk, and DTV. That also included serious national procurements on supercomputer and USO internet service. Those case studies, opportunity and the amount of the budget were diluted into the big ocean of technological advancement. Sustainable development is yet possible while the digital divide has been enlarging continuously. Meanwhile, 5G, AI, blockchain, and quantum computer are already challenging ahead. However, up to date most communication engineering and IT R&D is still being trapped in the same valley of death and the national technology adoption is cycling in the loop of “procurement & prosecution” as before.

This is especially true for the forthcoming quantum IT era where quite a high potential technology will be developed from. But there are also a number of fraud or fake technology- cases including too much hype around the world, as two sides of the same coin. In parallel, recently the Thai quantum information (Q-Thai.org) forum has found many local misleading in quantum based education, R&Ds, products, and news. As examples, about half of the publication on experiments fall into fabrication, fundamental particle with specific “unit” is founded in all high school sciences books (solely particle, not that wave-particle duality), and many other strange, while there are only a few people involved to solve them.

However according to the widespread local news, once the national quantum tech roadmap was shown instantly from a new policy maker, a feeding program budget was allocated following those hypes promptly. Previous few number of experts is then increased exponentially just over a year and ready to commit “quantum innovation” to the motherland in near future! These illusions are similar to the past lesson learned and seem to drive our future back to that valley again.

In order to fill the new gap of failure early, one of the promising methods is to learn history with past failures and success stories, next through realization of present situation, and to bridge over that trap toward the future. In 2019, Thai ComSoc then proposed a long term preventive action targeting “Learning History for the Better Future” for general audiences by starting first on the “Light and Quantum” topic. Thankfully, it is our honor that the IEEE Foundation granted one year support to that insight. In details, this project is to explore and to benchmark related Thai histories with those of overseas including the interview, survey, seminar and meeting, book and media publishing, talk, and exhibition by focusing on people with minimum background.

Starting with the main content, pictorial milestones on those two topics are created in a simple form of timelines with attractive pictures, because understanding that latter-younger quantum topic is however highly difficult. Therefore, studying quantum technology along with the more familiar on older history of light by timetabling them in dual tracks is implemented. Eventually after a year of various attempts, a pictorial resource is now ready to present the 400-year history of the classical light through a century of quantum mechanics to the modern era of quantum information technology. Indeed, they are compared with a short 40 years of all Thai related stories. Besides, local pseudoscience, fake news and products, misleading in policy, etc. are also recorded. Once these both sides are considered with other national indicators for competitiveness, technological advancement in the future should then be foresighted precisely.

Initially, 200 books with a few thousand timeline-posters and postcards are made and donated to schools, universities, IEEE and ECTI members, and others around the country via the network of MWIT (Mahidol Wittayanusorn) Science School and IPST. Exhibition is also organized with public talks. One was with the IBM quantum computer keynote speech by Dr.Nicholas T. Bronn on November 21. This project has encouraged active participation where the target audience is estimated at about 3,000 by the end of 2019. All kinds of results are now serving unlimitedly online at www.quantum-thai.org/light-quantum-milestones-2019.

This pictorial history project is not only addressing the global challenge on “Light and Quantum” and for public understanding and awareness, but also support as a reference source to prevent people from related fraud or fake technology and news. In addition, it is anticipated to help eliminate the old and new frontier hype of the policy side as well. Project extension to be a “fact-check” center will also be considered next.