Madrid, March 2020: A Distinguished Lecturer, a Conference and a Virus 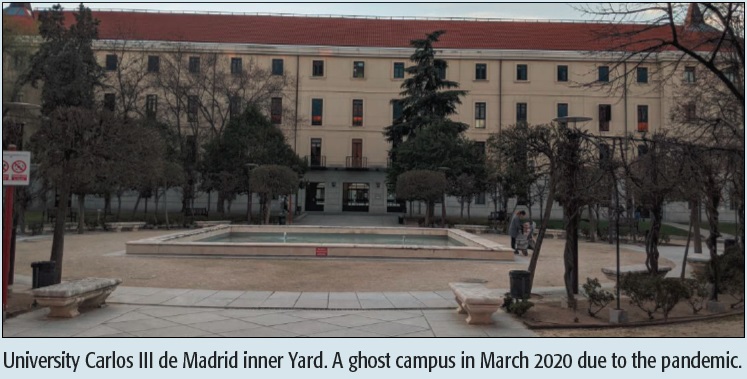 Once upon a time, there were a distinguished lecturer, a conference and a virus. Wait, what is this? We know that the audience of this newsletter expects a technical report on activities. We know that this is not the typical article in this section. We know that you probably expect a different story, but some months ago the COVID-19 appeared and the world was turned upside down. We had to settle to new situations and new scenarios. We had to change our activities and our way of doing them. We had to modify our ways of interacting with people and communication. Now, after more than half a year, somehow, we are used to do it, but what happened just in the very beginning when there were more uncertainties than facts?

This is the adventure of a Distinguished Lecturer, Dr. Gaurav Sharma. The story began in November 2019, more or less the same time that the virus. The organizers of the IEEE Student Women in Engineering and Young Professional (SWYP) 2020 Conference contacted me (Víctor) to request my collaboration, as the IEEE Spanish Signal Processing and Communications Joint chapter chair. The idea was to rely on the IEEE Distinguished Lecture program to bring to Spain a recognized scientist, Dr. Gaurav Sharma, to give a talk at this conference and is some other places in Spain. The deal was very attractive, a win-win opportunity. The organizers had the possibility to have a distinguished speaker at the conference at very low cost, Dr. Sharma would have a very large audience, and the chapter would gain more visibility of their activities, giving added value to their members and making efficient use of their resources.

The conference was scheduled for 12-14 March 2020 in Zaragoza. In November, I contacted to Dr. Sharma to explain the plan. We needed more than one country for the tour so I also contacted several countries in Europe. Finally, we organized jointly with the French Chapter. Everything was organized and ready in January and we received final approval from ComSoc.

March arrived quickly, and news of the virus came very fast in these days too. The lectures were scheduled as follows: March 11 in Madrid, March 13 in Zaragoza as the conference plenary, and March 14 in Malaga. From there, Dr. Sharma would fly to France for other lectures.

The adventure began. Dr. Sharma arrived in Madrid on the morning of March 9. This day in the afternoon, the authorities in Madrid ordered the lockdown by Wednesday, March 11 to give some time for people to plan accordingly. The DL in Madrid on March 11 was automatically cancelled. The conference was still alive by Tuesday. Dr. Sharma took the train to Zaragoza knowing already that the talk in Málaga was also cancelled. Upon arrival at Zaragoza, the authorities in Zaragoza cancelled the event. In few days, the situation with the virus in Spain became a nightmare, and not only here. During this week there was an explosion of cases throughout the world. The USA started to close for people coming from Europe. At this point, Dr. Sharma and I decided that the best idea was also to cancel the lectures in France and come back to the USA as soon as possible before they closed. He managed to change his flight ticket for Sunday. I was very worried that Dr. Sharma was infected here. Fortunately, he arrived safely at home and without the virus as a gift.

The situation and the mood of our souls can be expressed through the photo above taken by Dr. Sharma on Wednesday morning on the campus of the University Carlos III de Madrid. The weather is cloudy, the campus is empty, the fountain used to decorate the inner yard of the campus is turned off. A ghost campus on Wednesday where two days before it was full of students, people, activities, stories, and life.

One month later, we organized one of the first virtual Distinguished Lectures with some of the topics Dr. Sharma was planning to cover in his in-person talks. Probably it was too early because people were a little bit confused with the situation and very busy managing children at home and at the same time teleworking. The talk, unfortunately, did not have the audience we expected, but it was nice to at least have it virtually. I (Víctor) had the opportunity to say thanks to Dr. Sharma for his willingness to coming here and his attitude in this strange and hard situation he had to feel. He was always positive and optimistic, making it easier for organizing and decision-making. In the future, when everything returns to normal, he is invited to give a talk in person.

The lessons learned with this situation are that activities can be moved to virtual with relative success if the timing and the publicity are correct. In addition, that IEEE network is very important for handling these situations, while emphasizing how much work still has to be done.