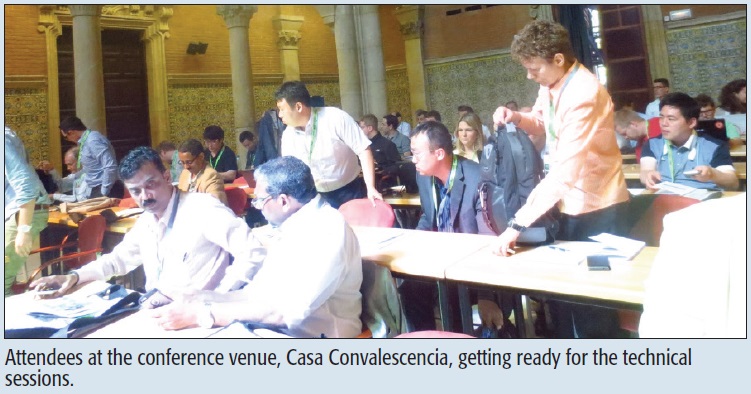 The sixth edition of the International Conference on Localization and GNSS was organized in Barcelona, Spain on 28-30 June 2016 jointly by the Universitat Autònoma de Barcelona (UAB), Spain and Tampere University of Technology (TUT), with the support of the European Commission DG Joint Research Center (JRC). The conference was chaired by Prof. Gonzalo Seco-Granados and Prof. J. A. Lopez-Salcedo from UAB. Assoc. Prof. Elena- Simona Lohan from TUT was TPC Chair, and José A. Del Peral Rosado from UAB was the Publication Chair. The conference was technically co-sponsored by IEEE through the IEEE Spain Section and the Spanish chapters of the IEEE AESS and SPS/ComSoc. The event brought together more than 70 participants from academia and industry for three days to the conference center Casa Convalescencia, which is a historic modernist building located next to the historic site of the Hospital de la Santa Creu i Sant Pau.

There were four high-caliber keynote speakers. Dr. Ignacio Fernández from the European Commission, Belgium, spoke about GNSS authentication features and key management, and the combination of authenticated and non-authenticated signals and sensors in GNSS and A-GNSS. Prof. Danijela Cabric from UCLA, United States, explained the concept of cognitive radio (CR) in the context of wireless positioning, and explored a set of CR cooperative localization algorithms for single and multiple primary users. Assoc. Prof. Klaus Witrisal from Graz University of Technology, Austria, concentrated on location-aware communications and how the location information can benefit the network. Dr. Javier de Salas, Broadcom, Spain, focused on the carrier phase positioning experiences in consumer global navigation satellite systems (GNSS) devices.

The session topics were security aspects in GNSS, GNSS receivers, cooperative and hybrid positioning, positioning via 5G & UWB, indoor navigation, RSS-based positioning, design, prototyping and testing of positioning devices, ionospheric, tropospheric and scintillation effects in GNSS, and a MULTI-POS special session on multi-technology positioning, resulting in 43 oral presentations. There was one award given at the event: the best paper award given to Josef Kulmer, a Ph.D. student from Graz University of Technology, Austria, for the work entitled “Cooperative localization and tracking using multipath channel information.” It is worth remarking that this year’s edition of the conference was focused almost equally on positioning with GNSS and positioning with terrestrial technologies, attracting participants from both communities and facilitating interaction between them.

The talks and the social events were compelling and of high quality. On the first evening, there was the welcome reception at the Noble Halls of the Barcelona City Council, where Dr. Miquel Angel Essomba, the Commissioner for Education and Universities of the Barcelona City Council, gave a warm-hearted speech. The Gala dinner took place on the second evening, in the La Gavina restaurant, after an exciting guided visit at Parc Güell, one of the best known and representative Barcelona landmarks and an example of the architectural genius of Antoni Gaudi.

In 2017, the seventh edition of ICL-GNSS will be located in Nottingham, United Kingdom. For more information, see www. icl-gnss.org