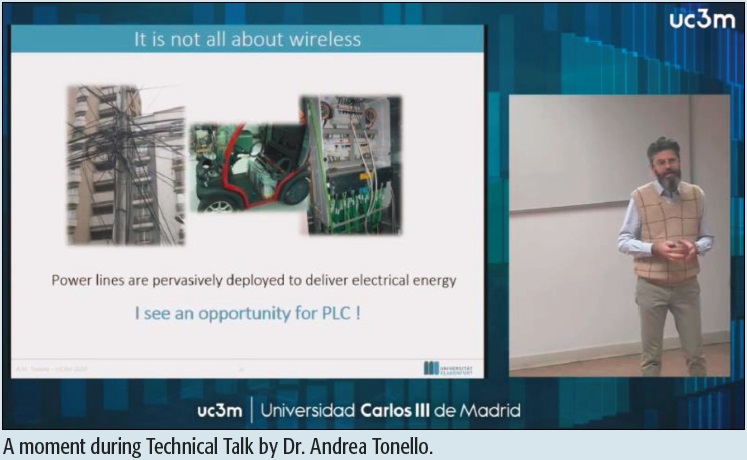 It used to be named Horizon 2020, but it finally became Wall 2020, a wall where all our dreams and hopes crashed and our world changed.

The year 2020 started fine. We began with a technical talk by Dr. Andrea Tonello (Chair of the Embedded Communication Systems Group, University of Klagenfurt, AT) at University Carlos III. You can find his bio at http://www.andreatonello.com/. The topic was “Where PLC Meets Wireless for Massive IoT and Smart Grids”. In this talk, Dr. Tonello presented a summary of the evolution of power line communications (PLC), and how the evolution of this wired technology is to be combined also with wireless technologies for novel services, improved reliability, and increased capability, especially considering the benefits of and for the Internet of Things (IoT) of smart grids. It was a quite successful talk and it was in person. We did not know at that moment, but it would be the last in person activity of the chapter in a while.

After that, we had prepared several DLT events for March in the framework of the IEEE Spanish (Student, Women in Engineering and Young Professional) SWYP 2020 conference. The two Distinguished Lecturers were Dr. Marco di Renzo and Dr. Gaurav Sharma. Some of the events were cancelled before they even started due to the situation, others were not. We have already talked about Dr. Sharma’s adventure in Spain in another issue of this Newsletter, and you can read the story there.

After the first months of uncertainty, the chapter re-started activities, this time in an online fashion. We re-launched the DLT by Gaurav Sharma (Professor of Electrical and Computer Engineering, University of Rochester, US) and that event was one of the first Virtual Distinguished Lectures (VDL) in ComSoc. The topic was “Probabilistic Decoding in Communications and Bioinformatics: A Turbo Approach”. In this talk, Prof. Sharma introduced and described the turbo approach to probabilistic decoding and reviewed its application in the original communications setting that was developed, and in the decoding of an RNA secondary structure, a key problem in bioinformatics. You can find his biography in http://www2.ece.rochester.edu/~gsharma/

Looking back, we realized that it could be too early for that. The VDL was in April. At that early stage, people were overpassed by work and they were adapting to new situations, and we did not publicize enough. Despite the adversities, the attenders (not as many as we expected) were satisfied, and there were a very nice discussion time after the talk. You can access the recorded session at:

After the summer holidays, the chapter organized the VDL by Dr. Marco Di Renzo (Senior Researcher, Supelec, FR). You can find his biography at https://l2s.centralesupelec.fr/en/u/di-renzo-marco/. The topic of the talk was “Wireless 2.0: Towards a Smart Radio Environment Empowered by Reconﬁgurable Intelligent Metasurfaces and Artiﬁcial Intelligence”. It was one of the most successful activities in the chapter. More than 180 registered and approximately 100 attended. There could have been more but some people were not able to access the WebEx tool. In the talk, Dr. Di Renzo introduced a new parameter to be tuned and optimized in wireless communications: the environment. So far, wireless engineers have estimated the environment and optimized transmission to cope with it. The revolutionary proposal here is to also optimize this scenario through some active tunable reflective metamaterials to improve performance. After the talk, the speaker spent more than an hour answering questions from the audience. The link for the recorded session is: https://ieeemeetings.webex.com/ieeemeetings/lsr.php?RCID=47564716ef2d4babbf0948104eb5671a

After this successful activity, we also organized two more technical talks on the topic of 3GPP and the standardization process, by Dr. José León Calvo (Ericsson Researcher, 3GPP RAN1 Delegate). The two talks were similar in content but with a different target audience. One of them was focused on students and the opportunities for them to work in this interesting area of telecommunications, while the other focused on IEEE senior researchers and how they can contribute. These events also had many attendees and the discussion time was very interesting.