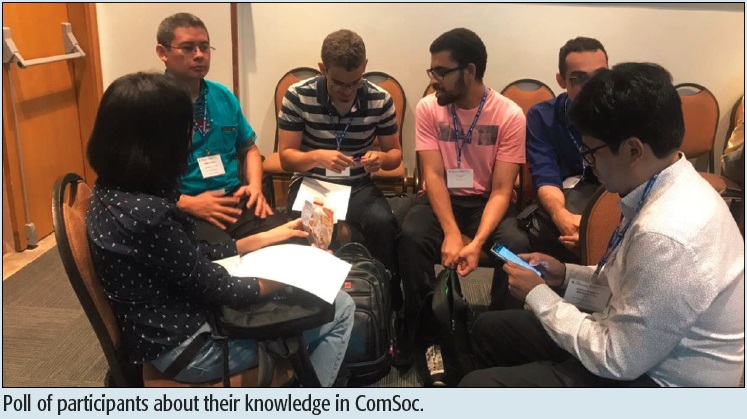 During the IEEE ComSoc regional conference in Latin America, LATINCOM 2019 in Salvador, Bahia, Brazil, a Meet Up with congress attendees among students in their last college year and professionals with at least 15 years of career was held. In addition, we invited IEEE and non-IEEE students from local universities to participate in the session.

In order to take an interactive activity, it started with an Ice Breaker. Participants introduced themselves and then divided into two groups to guess each other’s group names. Then, to know more about participants’ expectations regarding the IEEE Communications Society, a survey was carried out with simple questions about their degree of knowledge about ComSoc, and the reason they attended the Meet Up. Different answers were given and after that, a presentation about IEEE ComSoc was given to the attendees, showing the Society, IEEE Young Professionals and its benefits of belonging to ComSoc.

Following this, a trivia game with technical and ComSoc topics was carried out using an online application. The attendee that answered the fastest each question received more points, and the one who collected more points received a prize.

Finally, a small panel was given among the four ladies and IEEE ComSoc YP volunteers that work in different fields of telecommunications. The idea was to present how IEEE ComSoc has promoted their carrers in the academia, industry and government sectors where each of them works. It should be noted that in addition to being Young Professionals, the panel members are WICE members.

The event closed with a networking space where attendees could know more about each other while they tasted typical local foods and beverages from the city.