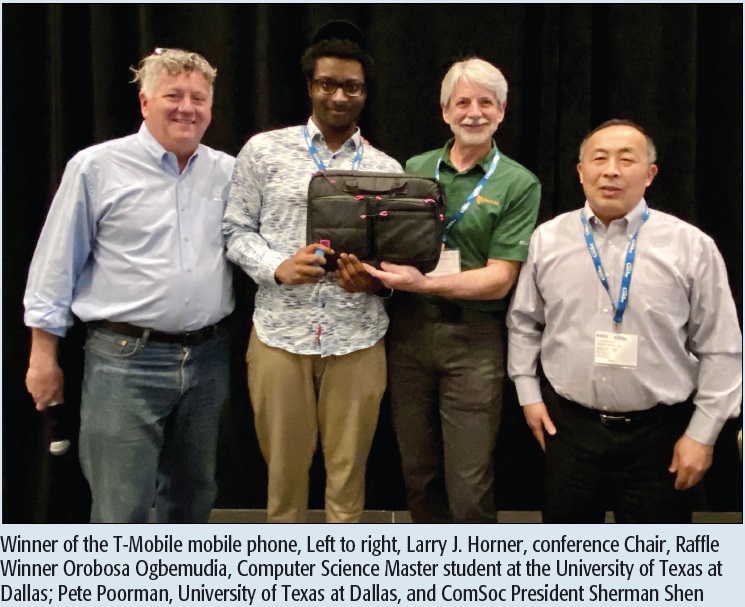 IEEE ComSoc held the first ever ‘Student Leadership Conference’ in Austin Texas on Saturday April 9, 2022. It turned out to be the best in anyone’s recollection. This conference was a one-day event. Unlike a typical conference, there were no paper presentations, rather the focus was on pursuit of advanced degrees, career development and career growth in the field of communication and engineering.

Platinum patronage for the conference was provided by Intel, with AMD and T-Mobile providing silver level patronage. The Dallas IEEE CVT chapter also provide a small donation to assist some students attend.

Our event was held at the Fairmount Hotel in downtown Austin Texas overlooking the Brazos River, and a few blocks from the heart of the city center and its famous music scene. Some members of the organizing committee also took advantage of the close proximity to the Congress Street bridge to celebrate in the nightly flight of the bats over the Brazos River. The conference was held one day prior to the WCNC conference, and this allowed some overlapping participation by some of our speakers and students.

The middle of the day consisted of four breakout sessions that ran concurrently with the attendees having been divided up into four groups, color coded on their badges. Each group rotated through each session. The four sessions were ‘ First job, Ninja Resume and Internships led by an all star team from AMD Laura Reuter and Melissa Fontenette-Mitchell. The second breakout session was led by Piotr Weglick of AMD along with Amy Guesner of Mediatek and Chris Hughes of Intel talking about Mentors and Career Coaches. The third breakout was led by Pete Poorman, Director of Industry Outreach at UT Dallas along with Sridhar Rajagopal Senior Vice President of Mavenir and Sean Lion, Senior Architect at Intel for a discussion on Career Progression. The final breakout session “A day in the life of an Engineer” was led by Veera Venigalli Enterprise Solutions Manager at T-Mobile and Adam Mendoza, Field Sales Engineer at Intel. After a slow ‘warm up’ period with the attendees these sessions became interactive and very engaging to the extent they had to be interrupted mid-session to keep up the conference schedule close to on track.

A sit-down lunch was served during which a “class photo” was taken between courses. Desert options were available, one of the most popular was the plate sized crème brulee, which by at least one account was almost as good as the Crema Catalana.

The conference concluded with a panel, fire side chat and the closing Keynote. The first of the panels, “Advances in CSP over the years” was moderated by Nokia Fellow Devaki Chandramouli and the panelists were Ericsson CTO, Mike Murphy, Brian Evans, Professor at UT Austin and IEEE Fellow, Sandeep Chinchali Professor at UT Austin and Raghavan Alevoor, Senior Manager at Deloitte Consulting. This panel discussion provided some insights and guidance from academia, research and industry perspective for students with their career development in the field of communications and engineering. The second was a “Fireside chat” led by Pete Poorman with Keith Dean, Senior Manager at Dell; Prakash Kartha Director at Intel and Mona Shukla VP at Ericsson.

Sherman Shen President of ComSoc closed out the formal portion of the conference with his talk on “How IEEE and ComSoc can help your career development.”

A social hour became livelier with the food stations and beverages bringing smaller groups together at the round top standup tables.

Overall, the conference was quite lively, engaging and one could always feel the “positive vibrations in the room” between the students (who were open minded to listen and learn), and the working professionals (who considered it as a “pay it forward” opportunity to support and guide).

Students from Rice University in Houston and The University of Texas, Dallas were numerous enough that they took coach bus transportation to and from their respective Universities to attend the Conference. While this proved to be a long day for them, they were well cared for and left the driving to the professionals.

This effort would not have been possible without the professional staff from ComSoc, Tina Gaerlan and Melissa Torres, and the conference organizing committee, Professor Alan Willner of USC, Devaki Chandramouli of Nokia, Sylvia Karmanoff, Piotr Weglick of AMD, Pete Poorman of UT Dallas and Web masters, Shyam Annamalai and Adarsh Deiraju.

T-Mobile generously donated an iPhone which was raffled off. See the photo of the happy winner!