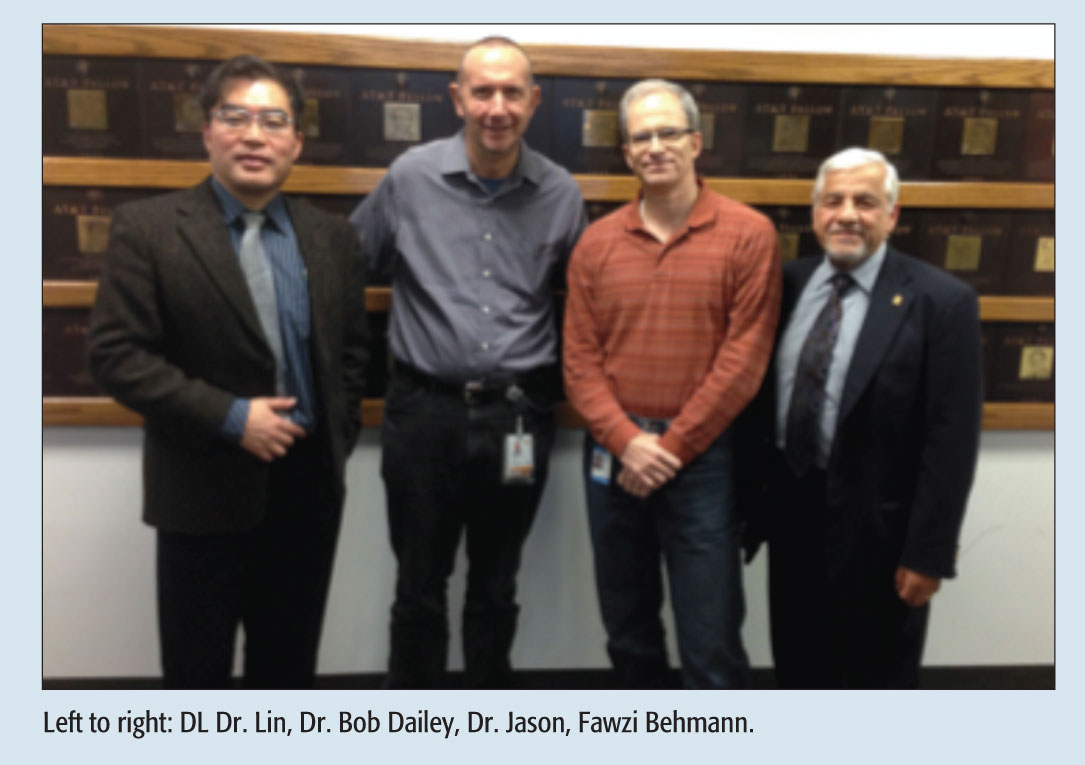 As a senior member of IEEE, it has been a great privilege to work with a talented team of officers to serve the chapter professionals and community here in Austin, which has made it a rewarding year for all.

As a brief introduction: Austin is the capital of the state of Texas and home to the University of Texas (UT) and many high tech companies. Austin is known as the Live Music Capital of the World, and is one of America’s fastest growing and most desirable cities. Over the years, the chapter has reached out and strengthened relationships with UT, as well as several of the local high tech companies including AT&T, IBM, NI, Freescale, HP, and others. As a result, we are grateful to be able to host our regular meetings at the nice facilities of AT&T. In addition, when the chapter brings a Distinguished Lecturer, it becomes a customary that not only does the DL addresses the IEEE but also visit and present at local companies such as IBM and AT&T.

2014 Planning: It all started with careful planning, articulating on the mission of delivering quality events to the membership/ community and providing opportunities for education and networking. The theme for 2014 was Wireless & Networking Architectural Evolution and Services. Among the key objectives were: conducting more technical meetings, engaging with DLT/DSP, increasing membership by reaching out and participating in local activities, collaborating with other societies and young professionals, supporting GLOBECOM 2014, ensuring the chapter’s financial health and ensuring that the chapter’s website is updated (http://sites.ieee.org/ct-comsp/) promoting meetings and special events, and growing social media content such as Twitter, Facebook and LinkedIn.

• In 2014 the Austin chapter conducted 34 meetings, of which 21 were technical meetings representing the highest in CTS for 2014. All meetings were reported in vtools and L31. 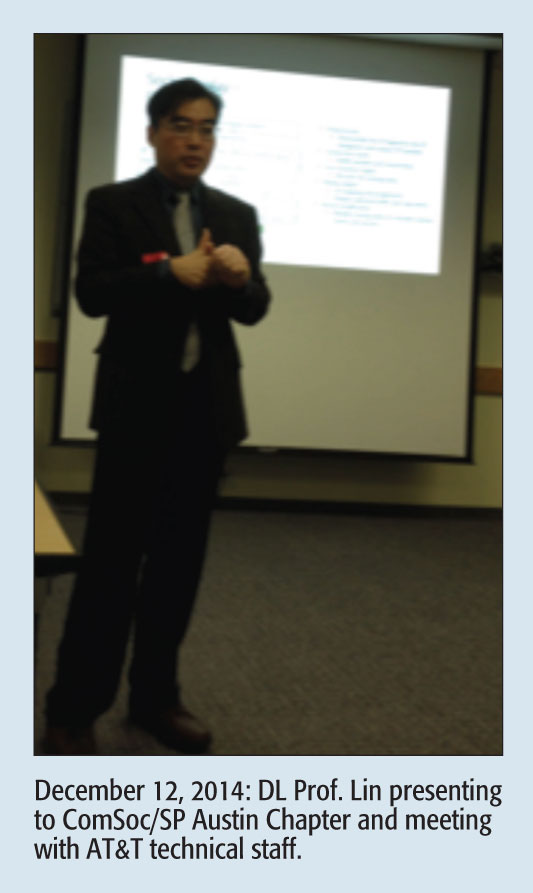 Distinguished Lecturer/Speaker Program: In 2014 the chapter hosted Prof. Ying-Dar Lin, IEEE Fellow, National Chiao Tung University, Taiwan. During his visit to Austin, Dr. Lin delivered presentations to IBM, AT&T ,and COMSOC/SP and other joint chapters. Dr. Lin spoke on “Traffic Forensics: Capture, Replay, Classification, Detection, and Analysis,” as well as “Software Defined Networking: Why, When, Where, and How.”

Speaker Appreciation Award: The chapter values the time and sacrifice put in by the speaker in delivering quality content. As a token of appreciation, the chapter prepared and delivered a personalized plaque to each speaker.

As a chair of the chapter, I collaborated with the Chinese American Semiconductor Professional Association (CASPA) chapter chair in Austin and held a few joint sessions. CASPA has more than 100 engineers, most of whom are not IEEE members. Joint sessions provided a forum for a good exchange and to provide information about IEEE membership. Overall, according to SAMIEEE, more than 50 new members were added to the IEEE COMSOC/SP Chapter in Austin in 2014.

• The Austin COMSOC chapter collaborated with several other chapters/councils. These included DSP, CS, I&M, TMC, CTCN, and CEDA. Among the examples, COMSOC joined other chapters for a full-day educational program on career development, including a workshop with more than 65 attendees. The theme was “Skills for a Multi-Faceted Career.” Among the speakers were Gary Black, IEEE-USA 2014 President, Bob Krause, IEEE-USA AICN, and others.

• Among other activities, the chapter helped Central Texas chapter chairs take advantage of the IEEE PACE Program. As a section PACE chair, I organized several PACE projects, which increased from three projects in 2013 to seven projects in 2014. I also led a PACE automation program that is expected benefit Regions 1-6.

• Among the new IEEE initiatives is Collabratec, for which I participated as a moderator representing the Austin Community in the pilot study, and engaged in creating messages and discussions to bring about building a community of interest for Austin.

• COMSOC co-sponsored a young professional mixer in Austin during SxSW in 2014. The event attacted more than 100 attendees. The chapter organized an information table. During that event, presentations were made by Glenn Zorpette, Executive Editor of IEEE Spectrum, and Dr. Robin Murphy, an expert on search and rescue drones.

• The chapter supported GLOBECOM 2014 (Dec. 8-12) and secured more than 100 students from the University of Texas, San Antonio, State University of San Marcos, and others who volunteered as room monitors and at the registration desk. As the chair of marketing and publicity for GLOBECOM, I sent an appreciation note to the students for their dedication and exemplary performance at the event.

Visibility at the Community Level: As part of our efforts to promote GLOBECOM 2014, we reached out to:

• City of Austin. We engaged with the Mayor’s office in Austin and succeeded in obtaining a Proclamation declaring December 8-12 to be IEEE week in Austin. Later, the Mayor’s office issued a quote that was used in a press release issued by COMSOC promoting GLOBECOM 2014.

Collaboration IEEE/Hilton/AT&T for GLOBECOM 2014 IT Infrastructure:

• The chapter successfully led an infrastructure IT project in delivering an enhanced WiFi/Cellular signal and coverage that supported more than 3300 client devices and 2500 persons attendees. With the upgrade of the Wifi network by Hilton and the cellular network by AT&T, the peak traffic reached only 30 percent of total bandwidth capacity.

• This was the first time ever in COMSOC that a feasibility assessment followed by implementation of upgrading equipment was undertaken for an international event.

Financial Health: The chapter continued enjoying good financial health due to careful budgeting and spending on meetings and events. Collaborating and joining with other chapters helped share expenses, and at the same time enabled us to add more meetings for the year. We do not charge for meetings. Regarding food and beverages (F&B), officers helped in ordering catered food and carrying them to the meeting facilities. Promotion of events, printing of feedback forms and transportation were done at no cost to the society. The appreciation plaques were typically purchased at a 50 percent discount at the beginning of the year, and personalization and execution were typically done by the chapter chair.