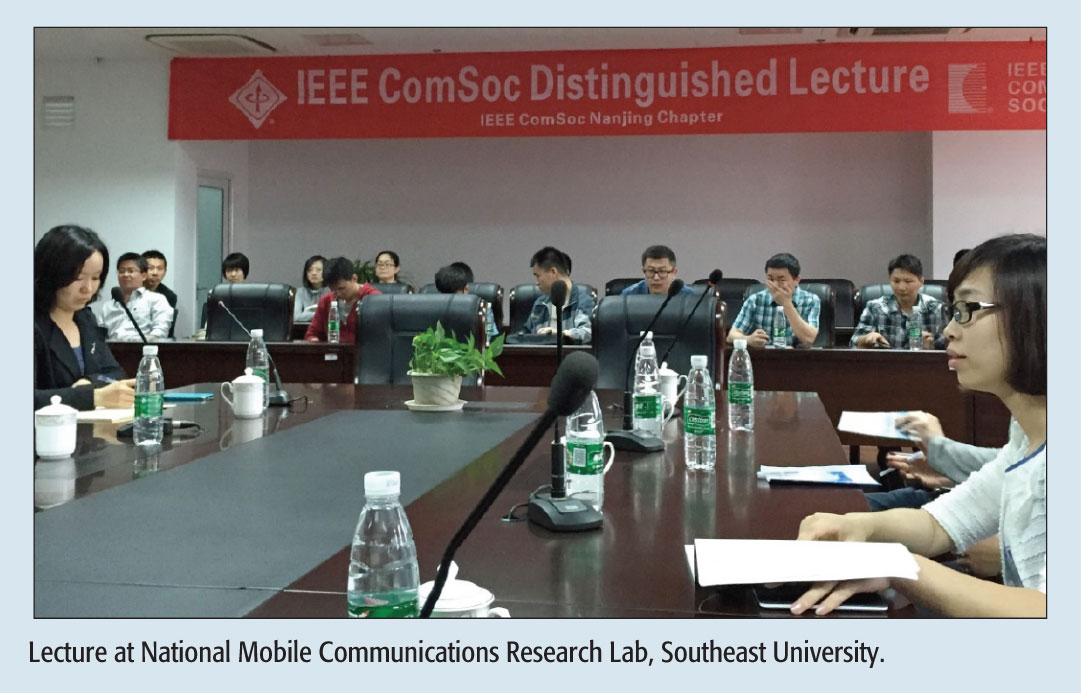 Dr. Tom Hou, IEEE Fellow, was invited by the IEEE Beijing Communications Society Chapter to give a 90-minutes lecture on“Advances in Wireless Networking for Cyber Physical Systems” on 6 May 2015 (Wednesday). The lecture was held at Beijing University of Posts and Telecommunications (BUPT) from 3 pm to 4.30 pm. There were approximately 30 attendees, including uni-versity students, academic researchers, and public participants from ICT related industries.

The lecture began at the preliminary level for the need and significance of cyber and physical systems (CPS). Dr. Hou’s lecture focused on two main areas. First, he discussed the through-put in multi-hop wireless networks, which is a fundamental problem in CPS. Second, he considered the energy problem in sensor networks, which is another fundamental problem. Finally,Dr. Hou talked about the new frontiers in sharing radio spectrum and co-existence between primary and secondary networks beyond dynamic spectrum access.

Participants were very interested in the topic and contents,and they actively asked their questions during the Q&A session,with the questions covering both the basic and professional aspects of the topic. Due to the shortage of time, several partici-pants had further exchanges with Dr. Hou after the session ended.

It was a pleasure for the Beijing ComSoc Chapter to host Dr.Hou, and the lecture brought many significant ideas to there search students.
After the technical talks in Beijing, Dr. Hou was invited to give an IEEE Distinguished Lecture in the China Network Valley, which is supported by IEEE ComSoc Nanjing, on 11 May 2015. This talk was hosted by Prof. Xiao hu You from Southeast University.More than 150 attendees included professors and students from the IEEE ComSoc Nanjing Chapter.

During the lecture, Dr. Hou mainly discussed MIMO’s related computational model in multi-hop wireless networks. First, Dr.Hou presented a clear classification of the existing MIMO model,which contains a matrix-based model and DOF-based model.The DOF-based model is divided into a conservative model and an optimistic model. Second, Prof. Hou focused on some newadvances related to MIMO’s capability in a multi-hop network environment. He presented his research on an optimal computational model, a new enabling technology to be used in the physical layer and the network layer, which combines the advantages of the conservative model and the optimistic model. Finally, Prof.Tom Hou proposed that most of these research advances were interdisciplinary and required a synergistic exploration of knowledge bases from multiple technical domains for future research.

In the question and answer session, Prof. Hou gave detailed and professional answers to the teachers’ questions concerning MIMO modeling, and the students’ questions about opportunities for member recruitment. This gave audiences a better under-standing of wireless networking and also stimulated their interests in exploring this area.