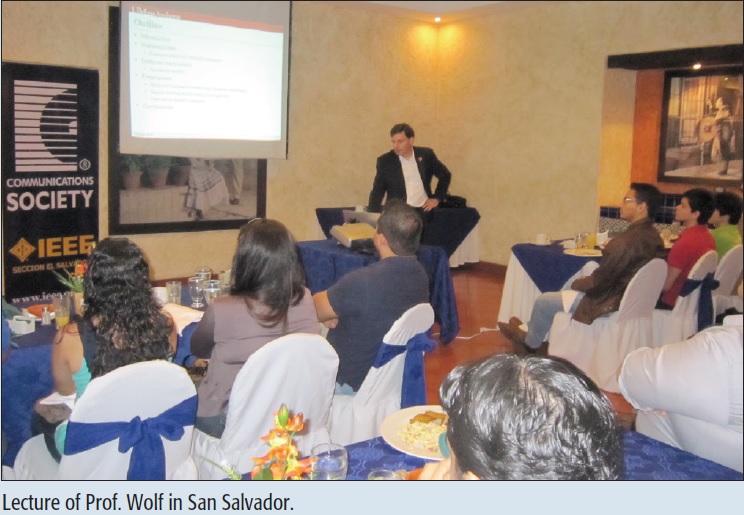 Prof. Tilman Wolf was invited by the Guatemala, El Salvador, and Panama ComSoc Chapters to conduct a Lecturer Tour in November 2015. All three sections asked for two lectures. The first two lectures were held at the World Heritage Site of Antigua Guatemala. This city that features Spanish Baroque-influenced architecture was the tour’s first stop. Tilman Wolf presented two of his best demanded talks: ‘Economic Principles for Future Internet Architecture’ and ‘Attacks and Hardware Defenses for Network Infrastructure.’ Both lectures supported the join effort made by Guatemala’s IEEE Computer Society and Communications Society. 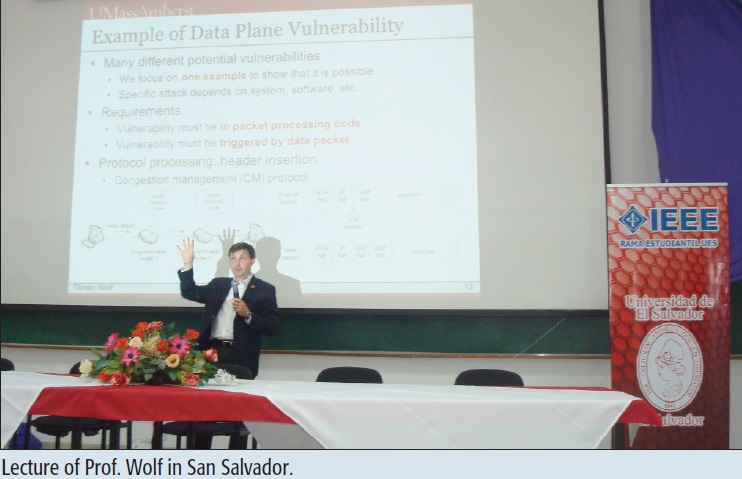 The second two lectures were given on November 11 in San Salvador, El Salvador’s capital. Prof. Wolf was awakened much earlier than 6:00 am, and without having any breakfast he traveled to the place were the lecture was arranged. The first talk started at 7:00 am, on the topic ‘Hardware Defenses for Network Infrastructure.’ In this presentation, Prof. Wolf discussed his research group’s recent work that illustrates the challenges in providing security in Internet routers. He provided an example that showed how vulnerable packet processors can be attacked through the data plane of the network. Using hardware monitors, he showed how his team has developed an effective defense mechanism against such attacks. Finally, it was explained how this work is also applicable to securing general-purpose embedded processing systems.

After finishing his presentation, Prof. Wolf traveled to the University of El Salvador. There the IEEE student branch called for a big meeting. More than 100 students attended the lecture. Again, the talk ‘Hardware Defenses for Network Infrastructure’ was presented. After this presentation Prof. Wolf interacted with the students. He explained to them how the functionality of routers inside the Internet continues to grow, as does their complex protocol processing operations for content adaptation, security, and network management. Most of the students were sophomores in the electrical engineering department who were attracted by the computer security issues.

But not everything was work. Central American countries are countries of volcanoes. Our guest was invited to visit El Boqueron, El Salvador’s national park, at the top of San Salvador Volcano. There, Dr. Wolf experienced the difference in weather: rain at the top and dry weather at the bottom, where San Salvador is located. For a few minutes it was possible to appreciate the beautiful sight of the San Salvador valley. From above, at a distance, it was possible to see at the same time the crater-lake of Ilopango and a fast-moving tropical rain on the verge of covering the lake.

The final talks were held on November 13 in Panama City at the Hotel Continental. This lecture was supported by the Panama ComSoc chapter made up mostly of professors and students from the Panama University of Technology.

It was a pleasure for the Guatemala, El Salvador, and Panama ComSoc Chapters to host the Distinguished Lecturer tour of Prof. Wolf.