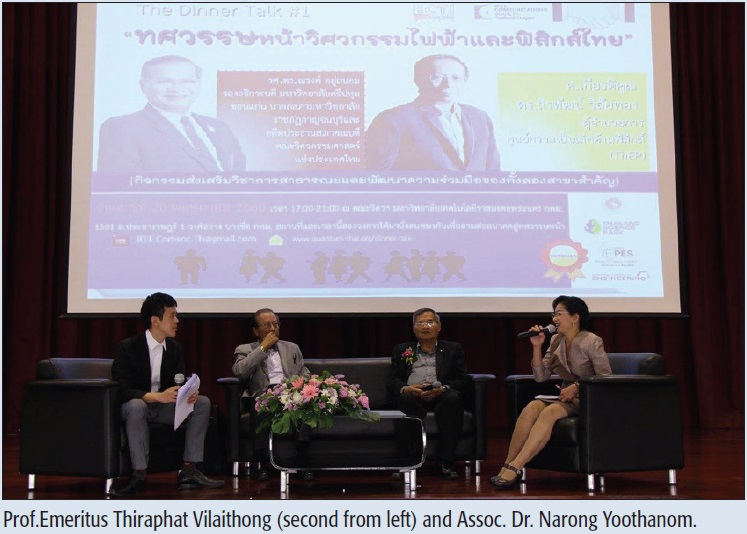 A special event to promote human resource development was organized by IEEE ComSoc Thailand with the ECTI Association on 20 May 2017 at engineering faculty, Rajamangala University of Technology Phra Nakhon in Bangkok. From the history, there was a long time and wide gap locally between physics and electrical engineering. Then, experts from both fields were invited to give an initial solution for making both societies closer.

Starting with the statement on the technical gap, there are various examples shedding light on the confusion between this brother community. Those are, for instance, in the new quantum communication field, as the quantum satellite, quantum repeater, and quantum “HACKING”. In particular, the latter is that the method to steal photons at the owner’s private place by opening the machine with heavily using optical and electronic tools along with the invited hacker (without consideration to the data at any storage nor password or other properties!). Borrowing the word hacking from classical IT by physicists, however different the meaning is mostly from the original, is a good illustration. Furthermore, a number of other ambiguous stories are still waiting to be clarified.

In addition to the above technical side, there are also other arguments apparently shown among local physicists and electrical/communication engineers as in human resource management, educational systems and support policy, R&D budget, their priorities in national S&T roadmaps, etc.

Initially, the IEEE ComSoc Thailand chapter agreed to help bridge that junction. The first dinner talk was then launched in order to track back on 100 years of Thai physics history and its brother, electrical engineering. We invited two colleagues from both communities who already spent more than 50 years of their working life in. They are Assoc. Dr. Narong Yoothanom, who is 75 years old and a senior advisor, a top class in electrical/communication engineering school, and Prof. Emeritus Thiraphat Vilaithong, who is 72 years old, a physicist and the director of the Thailand Center of Excellence in Physics.

During the talk, we all learned the history of both sides compared to many related cases overseas. By looking forward to the next decade, networking people of both societies, “engineering the physics”, expanding or setting up further joint activities, are also discussed impressively.

Seventy people (IEEE members and non-members from universities, industry, and others) as well as a former deputy Minister of Science and Technology, attended this free event with a buffet dinner. Pictures and a sound recording are available at www. quantum-thai.org/dinner-talk.

After talking and filling (some part of) the gap by people from both societies, another absolute question awaiting everyone to answer was on at the end.

How far is the gap between Thai physics and electrical/communication engineering and those of developed countries?