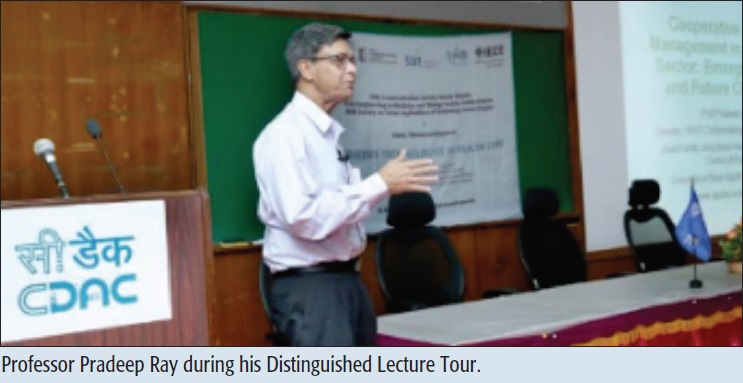 The IEEE Communications Society (ComSoc) Kerala Section chapter organized a one day workshop on the contemporary and interdisciplinary engineering topic Internet of Things (IoT) on 10 December 2015 in Trivandrum. This event was co-organized with the third edition of the International Conference on Recent Advances in Computational Systems (RAICS) 2015. This workshop was supported by $US800 in funding from the Region 10 ComSoc Chapter. The event was attended by 40 people, which included a mix of students, academics, and industry professionals.

The event started at 9:30 am with a welcome speech by R. Ananthalakshmi Ammal, the ComSoc Kerala Section Chair. The workshop led by Dr. Srikanth (Chief Knowledge Officer, Nanocell Networks) was scheduled into four modules. The first module provided an overview of IoT applications and current trends in IoT. The second module discussed the technologies enabling IoT, such as sensors and actuators, wireless, IoT platforms, big data, and cloud. In the first half of the afternoon session, real time demos of IoT applications such as remote home monitoring and automated moisture control for soil were demonstrated by Mr. Vignesh Pai (Senior Technical Trainer, Nanocell Networks). The final session focused on protocols and standards of IoT applications.

The IEEE Communications Society Kerala Section organized two Distinguished Lecture Programs (DLPs) during the month of March 2016 on the topic “Cooperative Service Management in the Healthcare Sector: Emerging Trends and Future challenges.” The first session was held on 30 March 2016 at the CDAC Trivandrum from 5:30 to 6.30 pm, with participation of approximately 35 people. The second session was held on 31 March 2016 at the Rajagiri School of Engineering and Technology (RSET), Kochi from 12 noon to 1.00 pm, with participation of more than 50 people. The sessions were presented by Professor Pradeep Ray from the University of New South Wales, Australia. Professor Ray is also the Director of the WHO Collaborating Centre on eHealth. His talk extensively discussed the role of technology in e-health and m-health initiatives, and its impact on rural areas. The sessions were organized in collaboration with the IEEE Engineering in Medicine and Biology Society (EMBS) and the IEEE Society on Social Implications of Technology (SSIT).

The ComSoc Student Branch at the College of Engineering Trivandrum conducted a ham radio event involving Morse code practice. An interactive session was first conducted with members of a ham radio club at the Kerala State Science and Technology Museum, Thiruvananthapuram on 21 July 2015.

The event started with a welcome speech from the ComSoc student branch chair. This was followed by a session by Joseph Daniel, who is a member of the Radio Amateur Society of Ananthapuri (RASA). He discussed the basics of ham radio, Morse code, and the relevance of ham radio in the modern world where a variety of communication options are available.

A live demonstration was carried out and we were able to contact a ham operator living in Attingal. Fifteen students participated in the session, including those who appeared for the examination on 31 July 2015. The session was concluded with a vote of thanks by the secretary of the ComSoc Student Branch at the College of Engineering Trivandrum.

The ham radio examination was conducted at the Kerala State Science and Technology Museum PMG on 31 July 2015. Seventeen students from the College of Engineering Trivandrum attended the examination, and all of them successfully passed the examination.

Industry Interaction Session: The Industry Relation Committee of the IEEE Malabar Subsection, in association with the ComSoc Student Branch Chapter at VJEC, conducted an industry interaction session on 3 August 2015. The inaugural session started at 9:30 am. Mr. Jayesh George, an assistant professor in the Electronics and Communication Engineering (ECE) Department, delivered the welcome speech. The session was then handed over to our featured guest, Mr. Mahesh Ravi Varma, who is senior digital design engineer at Texas Instruments. His talk focused on robotics, embedded design, signal processing, and entrepreneurship. More than 60 students attended the session.

Project Competition: The ComSoc Student Branch Chapter organized a project competition for the students in Electronics and Communication Engineering (ECE) Department. Students who had a new idea were invited to participate in the event. Approximately 10 teams registered for the event. A project exhibition was conducted and prizes were distributed.

Seminar Competition: The ComSoc Student Branch organized a seminar competition for seventh semester ECE students on 28 August 2015. Ten teams participated in the competition, in which each one of them presented seminars on a topic. Prof. Roshini (head of the ECE Department) distributed the prizes.