By Fawzi Behmann - Director of the NA Region, USA 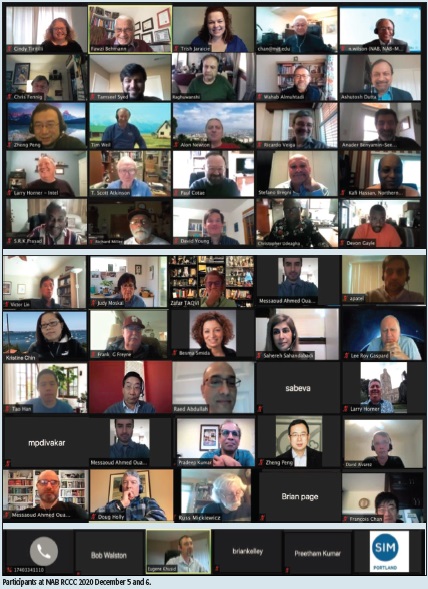 The 2020 NA RCCC is the 36th North America Chapter Chair Regional Congress, but the first to be held virtually due to the pandemic situation. The RCCC was called to address feedback received from a survey that was sent to the 94 Chapter Chairs in late June. The RCC 2020 program was planned and executed, delivering 18 virtual sessions on Saturday, December 5 and Sunday, December 6 just prior to the Globecom 2020 virtual conference.

I would first like to introduce our NA Board for 2020. You can find further information on our web site at http://na.regions.comsoc.org/board/. Our Board serves 94 chapters and 10,000 members and is composed of volunteers serving seven regions (six regions in the U.S. and one region in Canada).

We also have eight Standing committees to support chapter chairs in key initiatives.

We operate on a set of ComSoc Policies and Procedures that have been approved by the ComSoc Member Global Activities Committee and ultimately the ComSoc Board of Governors. All details can be found at https://na.regions.comsoc.org

We are pleased that many of the ComSoc Leadership participated and supported RCCC 2020:

The program consisted of 18 virtual sessions:

The RCCC 2020 was well attended with a total of 56 participants including eight from ComSoc leadership and 48 representing various chapters from all the seven regions.

Thanks to the commitment of 16 volunteers that provided support to the program, coordinating with speakers, moderating and handling Q&A.

Overall the program was a great success and it was the first for many attendees. Many expressed the wish to have a more frequent RCCC to keep the dialog and relationship going among chapter volunteers and ComSoc staff. Participants found out after 13 hours of zoom sessions such a gathering was like a reunion with a great sense of appreciation and unified purpose exhibiting a great collaboration between volunteers and ComSoc Staff and exploring opportunities to grow membership and serve the community.

Training was vital on various tools such as vTools, OU Analytics, Operational tips and Chapter best of practices of making a chapter vital and leveraging a great program such as Virtual Distinguished Lecture (VDL) (more than 59 VDL sessions were organized), chapter funding and awards and many others. Chapters engaged in contributing articles to the ComSoc newsletter, as well as applying for Exceptional Service Awards.

For 2020, the top three recipients of NAB Exceptional Services Awards announced during RCCC were: