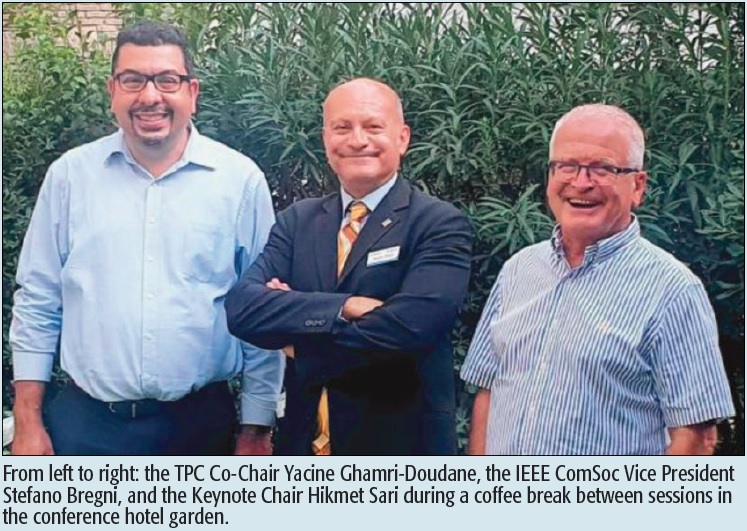 The New ComSoc Regional Conference for the Mediterranean Region 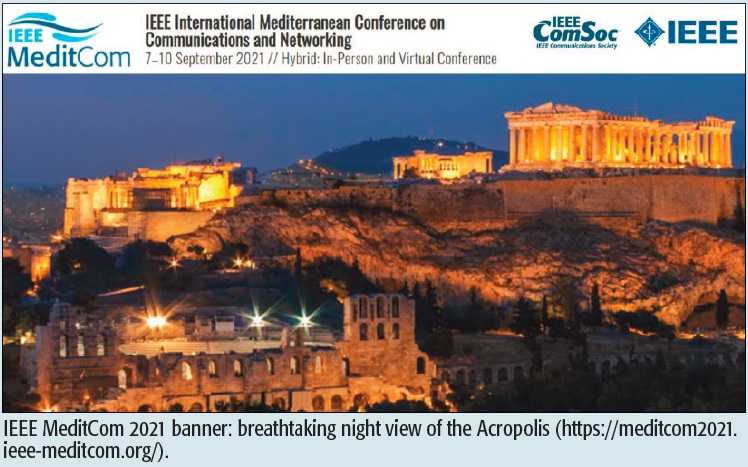 The creation of the new IEEE ComSoc Regional Conference for the Europe, Middle-East, Africa (EMEA) Region, named the International Mediterranean Conference on Communications and Networking (IEEE MeditCom), dates back to early 2019. At that time, the IEEE ComSoc President, Khaled Letaief, started the project of launching this conference and, at the end of the same year, announced it to the ComSoc Board of Governors. The preparation of its first edition started under the leadership of Khaled Letaief and Stefano Bregni, ComSoc Vice President for Conferences, and it took nearly two years to bring this initiative to fruition, thanks to the hard work and commitment of many volunteers, particularly the organizing committee members whose names are listed below.

A strategic goal of ComSoc with Portfolio Conferences is to ensure the highest geographical diversity and maximum coverage for all Regions, aiming to give all members in all Regions the opportunity to attend highly relevant technical conferences nearby, regardless in what Region they live. As Stefano Bregni has often said: “If members cannot travel to good conferences, let’s bring good conferences to the members!”

A key role in this strategy is played by Regional Conferences, which are ComSoc Portfolio Conferences organized each in a specific Region, drawing involvement from the local IEEE Sections, ComSoc Chapters, and Sister Societies. They have extensive coverage of ComSoc’s entire technical scope. Their goal in ComSoc’s overall strategy is to reach out to all countries by paying extra attention to disadvantaged areas, and ultimately to drive membership development. Currently, there are five ComSoc Regional Conferences:

IEEE MeditCom has been launched to be the reference conference, with an international stature and broad coverage of topics, serving the whole Mediterranean Region, which consists of over 20 countries and around 480 million people living across three continents: Africa, Asia, and Europe. The MeditCom series of conferences will be organized every year, bringing together visionaries in academia, research labs, and industry from all over the world to the shores of the Mediterranean Sea, featuring a technical program of outstanding challenges in the areas of communications and networking.

After two years of preparation, the first edition of IEEE MeditCom took place on 7–10 September 2021 in Athens, Greece. This was really a fantastic location for the inauguration of MeditCom! Known as the “cradle of Western civilization,” Athens and Greece are famous for their history, art masterpieces, and natural beauty.

IEEE MeditCom 2021 (https://meditcom2021.ieee-meditcom.org/) attracted high interest among the community and received a total of 242 submissions, including technical papers, abstracts, and project demos, from 50 countries from five continents. This high response from the research community provided an excellent opportunity for a quality program, but also called for a demanding paper evaluation process. The 165 members of the Technical Program Committee worked responsibly and efficiently under tight time constraints to produce a total of approximately 650 reviews, which provided the basis for the final technical paper selection. All papers included in the Proceedings published in IEEE Xplore received at least three reviews each.

Additional facts highlighting the success of IEEE MeditCom 2021 include: nearly 160 paid registrations, of which more than 30 registered for in-person attendance, impressive numbers given that the conference was launched in the midst of the pandemic; 10 project demos; and three tutorials, two industry panels, five workshops, six special sessions, and two Young Professional panels, complementing the main track program. The program also featured 10 EC-funded projects on 5G, 6G, security, and many other hot topics in communication and networking.

Athens is a modern, vibrant metropolis and the principal center of Greece for business and foreign trade. Regenerated to hold the 2004 Olympic Games, it has the facilities, services and infrastructure to host the most demanding events.

Athens is the oldest new destination, fascinating visitors with its history and heritage, and the contemporary experiences that it offers. It is an open air museum of world-class cultural heritage attractions and a city with an urban personality. 3000 years of history can be seen within 5 km walking distance.

The Acropolis is one of the heritage monuments dating back to the classical era, with the emblematic Parthenon being one of the most widely recognized monuments in the world. A visit is also recommended to the emblematic Ancient Roman Agora, the Temple of Olympian Zeus, and a plethora of other monuments.

A visit to Athens would not be complete without visiting some of its amazing museums, showcasing the city’s incredible history and its relationship with art and archaeology, beginning with the Acropolis Museum and the National Archeological Museum, which feature a number of unique masterpieces of classic Greek art.

Several places can be visited around Athens for half- or full-day tours: the Meteora, which is one of the largest complexes of monasteries; Ancient Olympia, which is the birthplace of the Olympic Games; and the Temple of Poseidon, which is one of the major monuments of the Golden Age of Athens. We would also suggest a cruise to the Argosaronikos Islands, including Poros, a.k.a the “little Venice” of Argosaronic, with its pine trees, tranquility, and nobility, and Hydra, the beauty of a Lilliputian Greek island that has seduced the international jet set as well as artists, and also Spetses, one of the top travel destinations for summer holidays.

IEEE MeditCom2021 took place in the hospitable and aristocratic Electra Palace hotel in the heart of the city. Classical in its architecture and design, blending beautifully with the noble historical buildings of the Plaka area, the hotel’s elegant luxury is complemented by the majestic views of the Acropolis that can be enjoyed from the rooftop restaurant, pool, rooms, and suites. 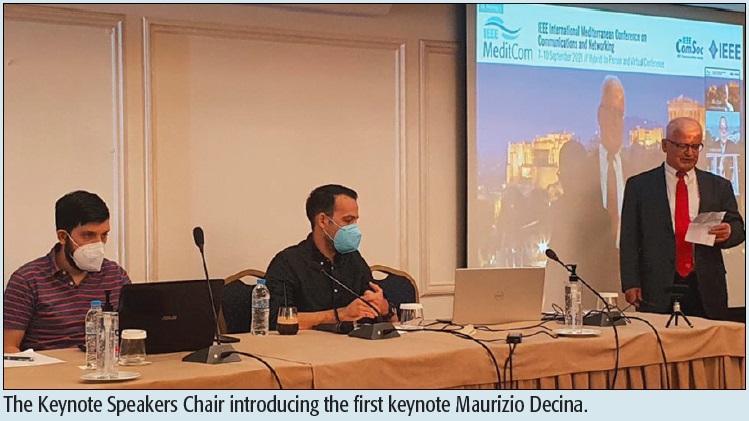 The technical program featured five exceptional keynote speeches, the first by Maurizio Dècina from Politecnico di Milano, who addressed the conference audience on gigabit connectivity, covering more specifically the recovery and resilience plan to reach all households and businesses in Italy. Next, Bernard Barani, from the European Commission, delivered a talk on the European Pathway toward 6G in which he gave the vision of the Commission for 6G and described the research activities within the Horizon Europe Program. The third keynote, by Merouane Debbah from Huawei, addressed the theoretical foundations of communications and computing and insisted on the need for fundamental breakthroughs to address the challenges in the new century. Next, Mischa Dohler, from King’s College London, focused on self-synthesizing networks that will shorten the innovation cycles for the development of future network generations. Finally, the keynote by Matti Latva-aho, from the University of Oulu, gave the vision of the National 6G Flagship Program in Finland addressing the key drivers for 6G, the societal challenges, and the business opportunities.

The three tutorials covered very interesting cutting-edge topics: “Task-Oriented Communication for Edge AI: From How to Communicate to What to Communicate” by Jun Zhang; “Towards Global Connectivity Using Aerial Ad Space Networks” by Mohamed-Slim Alouini and Mustafa Kishk; and “Safe Drone Operations Supported by Cellular Networks” by Evgenii Vinogradov and Sofie Pollin.

While 86 percent of submitted authors (87 percent of accepted authors) were from the EMEA region, reaching the target to offer a regional venue for EMEA ComSoc members, all five continents were represented in both the received submissions and the accepted papers. 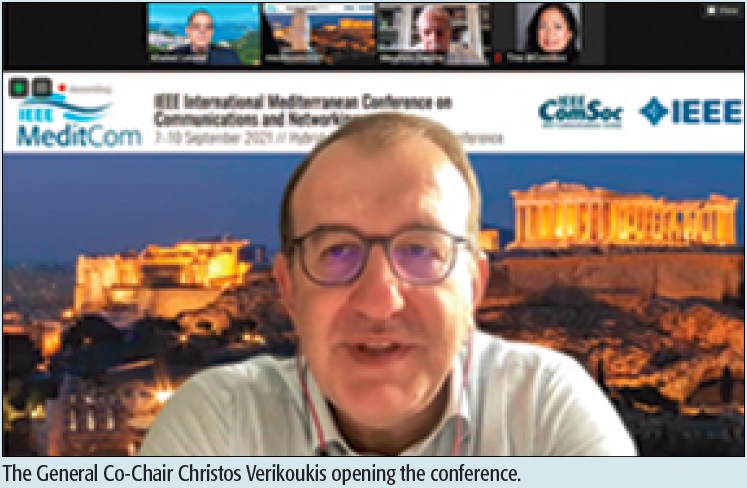 As a result of this impressive number of submissions, a rigorous review process allowed the construction of a main track program hosting 11 technical sessions, including 53 technical papers selected with a 49 percent acceptance ratio. These high-quality papers covered a broad range of topics across the ComSoc portfolio, including softwarized networks and their management, including 5G and beyond networks; AI/ML in networking; energy-aware networking; security and privacy; IoT and vehicular networks as well as their most recent advancements; and the latest achievements at the physical layer of wireless and optical networks.

Besides the main track, during the first and last days of the program, six Special Sessions and five Workshops were hosted, mainly organized by projects funded by the European Commission. The presentations by authors were presented in very interactive sessions showcasing early results and abstracts of ongoing projects in different areas of 5G, 6G, and security.

Also, a demo program hosted 10 demo papers in different 5G and beyond areas, mainly from EC funded projects, and they gave a more hands-on flavor to the conference.